Despite Alpheratz being the brightest star in the constellation of Andromeda it is in fact also rather confusingly the brightest star in the square of Pegasus! In 1930 the International Astronomical Union (IAU) decided to standardise the boundaries of the constellations which could be represented on various star charts in a very chaotic way. The boundaries they drew up in 1930 are still used today. They decided for some unknown reason the star would be transferred away from Pegasus to Andromeda. It is an example of an illogical parcelling out of the stars. 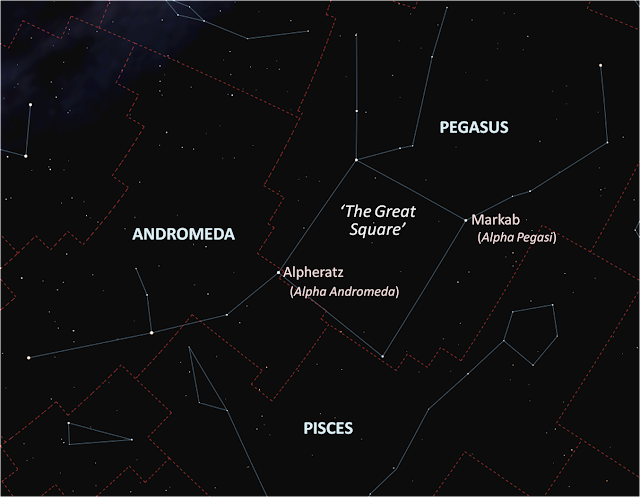 In defence of the IAU astronomers for over 2,000 years had been allocating the star to both Andromeda and Pegasus. In fact after 1603 when Johan Bayer allocated a Greek letter to the brightest 24 stars of each constellations there are examples of the star being labelled on various star charts as either alpha Andromeda or delta Pegasus!

The square of Pegasus once identified is used as a signpost during autumn evenings in order to find other stars. Once identified it will be easily seen on subsequent nights. One problem that many people have when using Apts and star charts is to underestimate the size of the square of Pegasus. It covers a larger area of sky that many people think it does.

Alpheratz which is sometimes also known as Sirrah means the ‘Horses Navel’ which clearly has nothing at all to do with a princess. This is another piece of evidence suggestion that it really should have been left in Pegasus. Apheratz is a B9 class star with a temperature of 13,500 degrees centigrade and lies 97 light years away.

There is a faint companion start nearby that was discovered by William Herschel in July 1781, this star is not a true companion star to Alpheratz it is a line of sight effect with the star lying at some distance from Alpheratz.