Winter in the northern hemisphere and looking to the south, the sky is dominated by Orion the Hunter and Sirius the Great Dog Star in Canis Major, the brightest star in the sky. Although Sirius is the object everyone looks at Adhara or epsilon Canis Major is also worth seeking out, its name means ‘the Virgins’ which of course has nothing to do with the mythological dog in the sky. Adhara is in fact part of an old Arabic constellation. 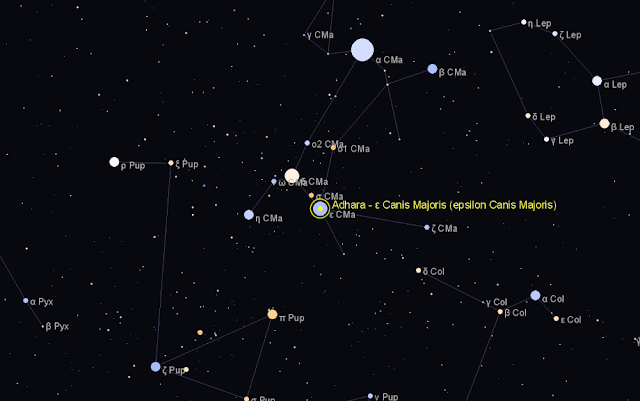 Unfortunately as seen from Britain Adhara is very low in the sky meaning that any haze makes seeing the star difficult. It lies at a distance of around 430 light years away and can be seen as a star with a magnitude of + 1.5 it is in fact the brightest of the second magnitude stars. First magnitude stars are brighter than magnitude +1.5. Around 5 million years ago it would have been the brightest star in the sky with a magnitude of -3.9, Sirius by comparison has a magnitude of -1.4. No other star will appear as bright as Adhara in the sky for at least another 5 million years. It only appears fainter than Sirius because it is very much further away. Sirius is only about 8 light years away.

Adhara does have a companion star which was discovered at the Cape Observatory in South Africa in 1850 but can only be seen with fairly large telescopes because the light from Adhara is so bright that it drowns the fainter light from its companion which could be seen using binoculars if it was not so close to Adhara.

It is much hotter than the Sun with a temperature of around about 22,000 degrees centigrade compared to the Sun’s 5,800 degrees and if your eyes could see in ultra violet light then Adhara would be the brightest object you would see in the sky.

When people talk about the spectrum they are usually referring the optical spectrum the colours of the rainbow. Scientists study the electromagnetic spectrum which covers not only visible light, but also infra red, ultra violet and radio.

In winter while looking for Sirius and Canis Major and you have a really clear dark night try looking for Adhara low in the sky in the south.