One of the two most famous star patterns that can be seen all year round from Britain are the Plough and the 5 stars that form the letter ‘W’ of the constellation of Cassiopeia. These are what astronomers refer to as circumpolar stars. 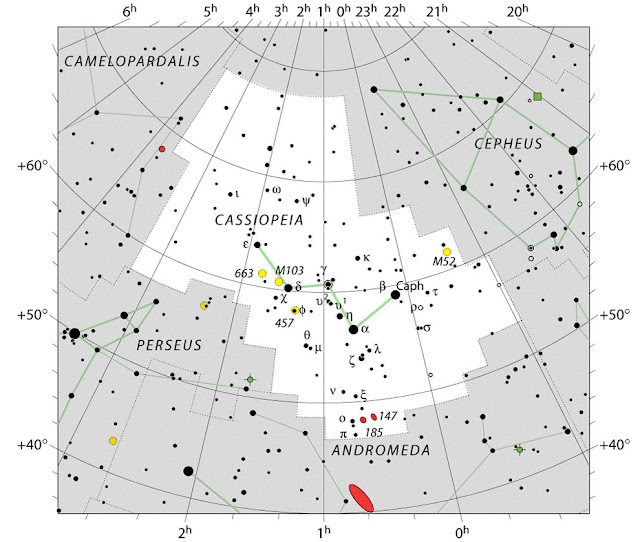 Beta Cassiopeia or to give its proper name Caph which means ‘Palm’ is the right hand star of the five stars of Cassiopeia that forms the letter ‘W’. It has a magnitude of 2.3 and it is a F2 giant star with a temperature of 7,000 degrees which is hotter than the Sun. Caph lies at a distance of 55 light years.

Caph is in the process of evolving, it was once a much hotter A class star and has now become an F class star. It will end its life as a M class red giant star, eventually all of its gas will be pushed away into space. It will go through a stage referred to as a planetary nebula so named because when astronomers saw these nebula for the first time several hundred years ago they looked like planets. When all the gas has gone all that will be left will be a white dwarf. Our Sun will go through the same evolutionary stages as Caph in the future.

Caph is rotating very quickly in fact it is rotating at 92% what astronomers refer to as its critical speed. This causes the star to appear not as a sphere but as an oblate spheroid.

As far as astronomers are aware Caph is a single star. In 1889 astronomers discovered a 14th magnitude companion star but since its discovery the two stars have become further apart suggesting that that are not connected in any way astronomers refer to these as optical rather than real double stars.