In the year 1612 William Gascoigne was born at Thorpe on the Hill, Middleton near Leeds, born just three years after the first use of an astronomical telescope Gascoigne would go on to make major contributions to the construction of accessories to use with telescopes, he would also forge links with some of the most important astronomers of the time, yet have a tragically short life.

He came from a family of local gentry, the Gascoigne coat of arms being the severed head of a golden conger eel. Very little is known of his early years, it is not even certain where he had his formal education. Whereas other people spent their leisure time hawking and hunting William Gascoigne was fascinated by the natural world and the world of instruments and machines.

We do know that by 1638 he was already a very experienced and seasoned astronomer. One point that seems bizarre with regards to his future life is that he received no training in mathematics. During Gascoigne’s lifetime the science of optics and the construction of telescopes were still in its infancy and was still a very secret subject which meant it was difficult for him to obtain books on the subject. However obtain books he did and he then became self-taught in the field of mathematics and optics, in fact what he was doing would be imitated by the world renowned Yorkshire telescope maker Thomas Cooke nearly two hundred years in the future.

By sheer dint of effort and research Gascoigne managed to have constructed a telescope and he even produced the lenses to go with it. The likelihood is that he almost certainly made several telescopes but we just don’t know how many. We know that he definitely had a telescope in 1640 because he was observing the Sun; Gascoigne was using the projection method to observe the Sun safely.

Gascoigne had made friends with two other astronomers William Crabtree 1610-1644 who lived in Manchester, and through Crabtree with Jeremiah Horrocks 1618-1641 who was born near Liverpool but later lived at Much Hoole near Preston, these three astronomers were the first people to start to get a grasp of just how big the solar system was. In 1639 Jeremiah Horrocks predicted that there would be a Transit of Venus, a transit occurs when a planet closer to the Sun than the Earth can be see passing in front of the Sun, this applies to only two planets, Mercury and Venus. While transits of Mercury are quite common those of Venus are extremely rare. Astronomers would use transits of Venus to try to work out how far away the Sun was. The Transit of Venus in 1639 was observed by just two people Horrocks and Crabtree. These three would become a formidable group of North Country astronomers but sadly only for a short period in time. They would all die young and at the time of the English Civil War.

However back to Gascoigne who had one of those lucky breaks in life. A spider had gotten into his telescope and spun a web. We can only assume at first that Gascoigne was pretty annoyed with this pesky spider messing around in his telescope but then he saw that the spider had done him a good turn, the web was very straight and very clear and he instantly realised that this could be used to perform a sight to make sure that you knew exactly where you were looking. He made the first cross hair wire albeit with spider webs. 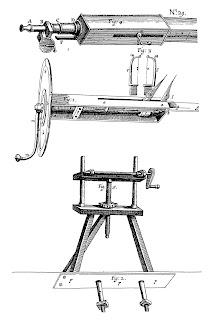 This spider web technology would in fact be used right up until the Second World War in optical equipment. Gascoigne would quickly appreciate those spiders webs would become an indispensable aid to astronomers. Here was a natural resource that was not only very strong and very straight and being a Yorkshireman quickly realised that they also don’t cost anything.

Gascoigne also suggested that if it was very dark so the web could not be seen a lantern could be placed to allow its light to sufficiently illuminate the web. This illuminating technology would remain the same for the next two centuries.

We have no idea how many telescope sights that Gascoigne would make however in 1640 when William Crabtree visited him he was impressed with the numbers of them produced. Jeremiah Horrocks when hearing of these inventions was full of praise and admiration for Gascoigne.

But Gascoigne did not stop there he now had the means to accurately find an object in the sky, but could he measure how far apart or how was and object in the sky. Taking his spider web technology he mounted two spider webs which were mounted in the field of view and moved towards or away from each other by means of a screw. A scale would show how far apart the webs were. This was the filar micrometer a direct development of the telescope sight. He would become the first astronomer to use a micrometer to measure the angles and positions in the sky. Using his micrometer, Gascoigne made numerous measurements of solar and lunar diameters, plus positions of the stars including the Pleiades or Seven sisters.

Today of course we have equipment that can measure an angle to a precession that Gascoigne could never have imagined. If however we want to trace the time line of today’s measuring equipment right back to the first micrometer, we end up with William Gascoigne at Middleton near Leeds.

The trio would all died in the early 1640s, Jeremiah Horrock in January 1641 from an unknown reason, he never got to try the new micrometer, William Crabtree died in 1644 during the Civil War
but it is unknown if he was killed fighting. We do know that William Gascoigne died at the Battle of Marston Moor on July 2nd fighting on the royalist side for the King. 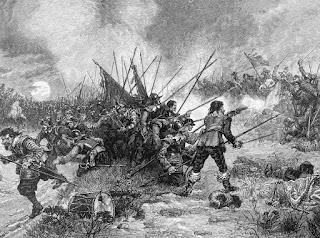 Much of his work then appeared to be lost or forgotten the micrometer does not seem to appear again until the 1660s about twenty years after the death of Gascoigne. However by chance some of his papers which survived the Civil War and the Great Fire of London came into the possession of Christopher and Richard Townley of Townley Hall in Burnley Lancashire.

They presented the papers to John Flamsteed the first astronomer royal that quickly realised just how important the work done by Horrock, Crabtree and Gascoigne was. Without the work of someone from the red rose county we would not have found out about the wonderful contribution to astronomy of this white rose person.