Virgo the Virgin
The 2nd largest constellation in the sky. Many myths are associated with this constellation which has usually been seen as a beautiful and virtuous maiden. But other legends have associated Virgo with successful harvests, and so she is pictured holding an ear of corn (Spica) in her left hand and a palm leaf in her right hand. In these legends she is identified with the Greek harvest goddess Demeter (the Roman Ceres)
Virgo contains a rich cluster of galaxies, the nearest major cluster to us at about 55 million ly.
Alpha or Spica which means ear of wheat has a magnitude of 1.0 and is a B1 class star with a temperature of 25,000’C and is 250 light years away.
Gamma or Porrima named after the Roman goddess of Prophecy has magnitude of 2.8, it is actually a double star the two stars have magnitudes of 3.5 and 3.6 a telescope is needed to see them they are both F0 class stars with temperatures of about 6,700’C gamma is 38 light years away.
Epsilon or Vindemiatrix which means grape gatherer is of magnitude 2.8 and is a G8 giant with a temperature of 5,000’C and is 110 light years away.
There are numerous Messier and NGC objects in Virgo 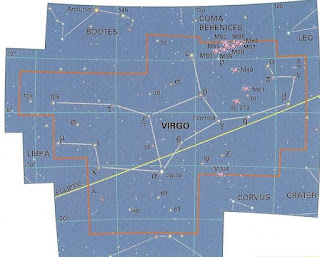