Vela the Sails
Formerly part of the ancient constellation of Argo Navis, which represents the ship that Jason and the Argonauts sailed on looking for the golden fleece. It was broken up by the French astronomer Nicolas De Lacaille in the 1750s, into three parts Carina the Keel, Puppis the Poop and Vela the Sails.
Since Vela is only a sub division of a once larger constellation it has no stars labelled alpha or beta. Vela lies in a rich part of the Milky Way with faint nebulosity which is visible on long exposure photographs.
Gamma or Suhail al Muhlif which means the oath taker has a magnitude of 1.8 and is one of the brare wolf rayetv stars with a spectrum of WC8, the temperature is around 55,000’C and lies at a distance of 336 light years. This star one of the closest WR stars to us.
Delta or Alsafinah which means the ship is a magnitude 2.0 star with a temperature of 9,000’C and is 80 light years away.
Kappa magnitude 2.5 is a B2 class star and is 570 light years away
Mu magnitude is a binary star of magnitude 2.7 the stars are of class G5 giant and a G2 star take 138 light years yo orbit each other. They can be seen with the naked eye. Mu Is 117 light years away and both stars have surface temperatures of around 5,000’C 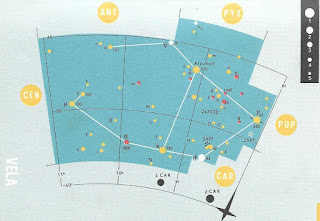