Ursa Minor The lesser Bear
A constellation said to have been introduced about 600 BC by the Greek astronomer Thales. Ursa Minor contains the present North Star or Polaris which is within one degree of the the north point. Precession will bring Polaris closest to the pole around 2100 AD after which it will start to move away again.
Ursa Minor is also termed the Little Dipper because its seven brightest stars form a shape like a smaller version of the Plough in Ursa Major. The stars Beta and Gamma in the blade of the small plough are referred to as the Guardians of the pole.
The stars are much fainter than the Plough ranging in brightness from the 2nd to the 5th magnitude, if there is any mist in the sky the fainter stars cannot be seen.
Alpha or Polaris which means ‘Polar Star’ magnitude 2.0, spectrum F6 temperature 6,000’C its distance is 430 light years. There are mysteries regarding Polaris it was believed to be a variable star in 1852 and was confirmed in 1911.varying between magnitude 1.8-2.1 since 1966 the variations have slowed and virtually stopped and cannot be noticed by the eye alone. Another mystery suggest that Ptolemy believed it was of the 3rd mag but now it is of the 2nd mag.
Beta or Kochab one of the guardians of the pole, magnitude 2.1 spectrum K4 giant with a temperature of 4,000’C and lies at a disatnce of 130 light yearsy
Gamma the other guardian magnitude 3.0, spctrum A2 giant, temperature 8,000’C, distance 487 light years 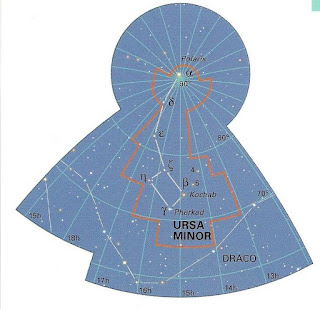