Ursa Major The Great Bear
The 3rd largest constellation in the sky. Its central feature is the seven stars that make up the shape variously called the Plough or Big Dipper, undoubtedly the best known of all star patterns, references of it are found in writings dating back to the dawn of civilisation.
In mythology it is said that Ursa Major was once a princess named Callisto who was so beautiful that the queen of the gods Juno became jealous of her and was unkind enough to turn her into a bear. Later Callisto’s son Arcas came across the bear while he was out hunting and drew his bow in readiness to shoot. He obviously did not recognise his mother!! Jupiter seeing what was about to happen changed Arcas into a bear and swinging both bears by their tails lifted them into the sky, stretching their tails in the process.
The two stars in the blade furthest from the handle Dubhe and Merak are called the pointers because they point to the North Star. UMa contains the brightest red dwarf star Lalande 21185 which is also the 5th closest star to the Sun at 8.3 ly . Joseph Lalande was a French 18th century astronomer.
There are many faint galaxies including several messier objects.
Ursa Major Moving Group epsilon, zeta, beta, gamma, delta FL 30,78,80 all 76-86 ly away
Alpha or Dubhe which means the ’Bear’ magnitude 1.8 spectrum K0 giant 123 light years temperature 4,500’C
Beta or Merak which means ‘Loin’ magnitude 2.4 spectrum A1, 80 light years, temperature 9,300’C
Gamma or Phecda which means ‘Thigh’ magnitude 2.4 spectrum A0, 83 light years, temperature 9,200’C
Delta or Megrez which means ‘Root of the Tail’ magnitude 3.3 spectrum A3, 80 light years temperature 9,300’C. Megrez appears to be a secular variable varying over a very long period of time. Ptolemy thought it was as bright as the other stars, I have seen it change in magnitude over a period of around 40 years.
Epsilon or Alioth unknown meaning magnitude 1.8, spectrum A1 giant, 83 light years, temperature 9,800’C
Zeta or Mizar which means ‘Girdle’ magnitude 2.0 spectrum A2, 83 light years, temperature 9,000’C. Zeta is a celebrated double star with its companion Alcor being seen with the naked eye when the sky is clear. Alcor is magnitude 4.0 and at 82 light years is also part of the moving group. Arabs used it as a test of eyesight.
Eta or Alkaid which means ‘Chief’ magnitude 1.9 spectrum B3, 104 light years, temperature 15,300’C
The following Messier objects are in Ursa Major
M81 spiral galaxy neighbours
M82 spiral galaxy 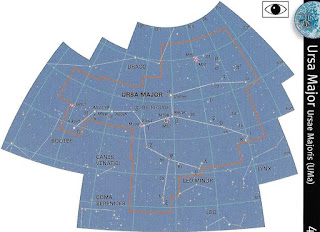