Tucana the Toucan - Southern |Hemisphere
A small constellation near the south pole of the sky introduced by Johann Bayer in 1603. It represents the Toucan a bird found in central and south America. The bird has a large beak.
Tucana’s most notable features are the Small Magellanic Cloud and the globular cluster 47 Tucanae
alpha with a magnitude of 2.9 is a K3 giant star lying 200 light years away and has a surface temperature of 4,000’C.
47 Tucanae is a large and brilliant globular cluster visible to the naked eye at magnitude 4.1 as a fuzzy star- hence on early star charts it was actually catalogued as a star. It is second only to omega centauri as the largest and brightest globular cluster in the sky. 47 Tuc is about 47,000 away and 120 light years across and contains millions of stars.
The Small Magellanic Cloud (SMC), a satellite galaxy to the Milky Way as is its larger brother the Large Megallanic Cloud which is in the constellation of Dorado the Goldfish. The SMC is clearly visible to the naked eye as a nebulous tadpole shaped patch in the sky.
It was first recoded by Ferdinand Magellan during his around the world journey in 1519-22. He recorded it as Nubecula Major which means ‘little cloud’. The SMC is about 200,000 light years away and contains several million stars 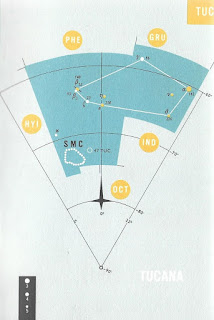