Pyxis the Compass
The smallest and least impressive of the four parts into which the constellation Argo Navis the ship was divided into in the 1750s by Lacaille. The other sections Carina, Puppis and Vela.
There are no objects of particular interest to users of binoculars despite the fact that the constellation lies in the Milky Way.
The brightest star and only one above mag 4.0 is alpha at mag 3.7 which is a B1 giant with a surface temperature of 22,000’C and is 880 light years away.
T Pyx is a recurrent Nova that has erupted more times than any other Nova. T Corona Borealis is referred to as the Blaze Star because it became much brighter. T Pyx erupted in 1890, 1902, 1920, 1944, 1960 and 2011. It lies between beta and lambda. At its brightest it has reached the 6th magnitude. 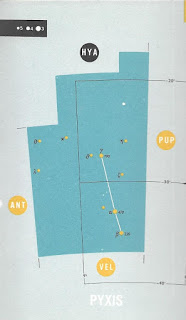