Pisces the Fishes
An ancient constellation representing a pair of fishes tied by their tails, the knot being marked by the star alpha. One legend identifies the constellations with Venus and her son Cupid, who turned themselves into fishes and swam away from the attack of the monster Typhon.
The constellations most celebrated feature is that it contains the vernal equinox – the point at which the Sun moves across the celestial equator into the northern hemisphere each year. The point originally lay in Aries, but has now moved into Pisces because of precession, eventually it will move onto in Aquarius. It is still called the First Point of Aries
Alpha or Alrisha which means rope or knot with a magnitude of 3.8 is actually made of two stars of magnitude 4.3 and 5.2, a small telescope will show both stars. Alpha is 311 light years away and is an A class star.
Eta the brightest star in Pisces is known as Al Kargh or outpouring of water with a magnitude of 3.6 , it lies 350 light years away and is a G7 giant star with a temperature of 4,700’ C
Gamma magnitude 3.7 is a G8 class stars with a temperature of 4,600’C and is 138 light years away
FL19 or TX Psc a deep red irregular variable. One of the reddest stars that can be seen by the naked eye. TX varies between magnitude 4.9 – 5.5 in a period of between 224-450 days. Its 900 light years distant. 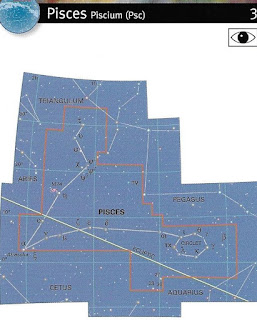