On July 21st 1914 the 9th satellite of Jupiter was discovered by Seth Nicolson at Lick Observatory using the 36 inch Crossley reflector. It was not until 1975 that Jupiter IX as it was referred to was named Sinope. The satellite has a diameter of around 125 km.

The 36 inch Crossley telescope was used in Halifax, Yorkshire by Edward Crossley and Joseph Gledhill during the 1880s and early 1890s at their observatory at Bermerside. However due to the poor quality of the skies over Halifax due to the large number of factories and mills, the telecope could not be used to its full potential. It was the largest telescope in private hands in England at that time.

Crossley decided to donate the telescope to the Lick observatory in California where it would be used to make many astronomical discoveries in the early 20th century. 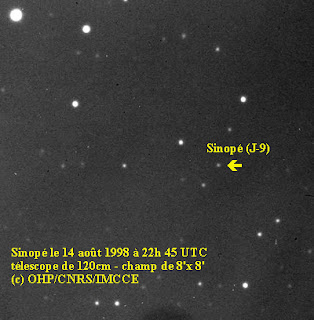