J Chadwick Bates was born in Oldham on June 17th 1826, he was educated at Manchester Grammar School and Queens College Oxford. He was ordained by the Bishop of Manchester in 1850. In 1858 he became curate at St Martin’s Church in the village of Castleton Moor, near Rochdale where he remained for the rest of his life.

He was interested in astronomy and meteorology, he had an observatory. Bates actually built the dome. The observatory housed a Cooke telescope with I believe had a 4 in lens. He obtained a blank disc and an equatorial Stand from Thomas Cooke in York in January and February 1865 respectively, so I assume he fashioned the lens himself. A 4 inch lens is a pretty standard size of lens for amateur astronomers in the 19th century.He also had a transit room with his observatory. 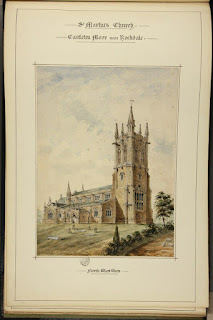