Edward Pigott 1753-1825
Born in Whitton in west London in 1753, with his father Nathaniel Pigott he led a vagrant type life always travelling around, in England and Europe in particular France. In Caen between 1763 and 1769 they observed the Partial eclipse of the Sun in 1765 and Transit of Venus in 1769.

Due to various connections the Pigott`s were asked by Prime Minster Prince Staremberg to complete a cartographic survey of the principal towns in the Austrian Netherlands. Using a clock, and a 6 ft Dolland telescope. They measured the locations of Namur, Luxembourg, Antwerp, Ostend, Tournay, Brussels and Louvain in 1772/3.
In 1777 they moved back to England to Gloucestershire then to Frampton House in Glamorganshire. Ships sailing up the river Severn often grounded, the charts showed the river to be 20 miles between Llantwit Major and Watchet in Somerset. The Pigotts measured the distance and found it to be only 13 miles wide.
At this time they had between them the 6 ft Dolland, a 2.5 inch achromatic by Watkins, a 5 inch reflector by Heath and Wing they also had clocks, two mural quadrants in an observatory on two levels
On March 23, 1779, from Frampton House in Glamorganshire Edward Pigott discovered a "nebula" in Coma Berenices, which later became known as M64 . Today M64 is known as the Black Eye Galaxy. This discovery occurred just 12 days before that by Bode and roughly a year before Messier's independent rediscovery of this object.
In 1781 they moved to York where they rebuilt their observatory which was considered one of the best in the country in private hands. Edward Pigott would work with John Goodricke the deaf astronomer where they would become the ‘Fathers of Variable Star Astronomy’.
They Pigotts moved to York because in 1773 Lord Faifax of Gilling Castle had died leaving an unmarried daughter Lady Anne Faifax as his heir to the estate. The Pigotts were distantly related to the Fairfax’s and Nathaniel Pigott saw this as his chance to move in and take over the estate.
He persuaded Lady Anne Fairfax to let him run the estate; she was duped into signing the estate to him. She only had one ally her chaplain John Bolton, anyone who opposed Nathaniel Piggot was dealt with harshly. The case would eventually go to court and there would be a private act of Parliament which in 1802 allowed for Nathaniel Pigotts second son Charles Gregory to inherit everything rather than the first born, Edward Pigott.
Edward Pigott was completely different from his father and was what we wouild describe today as being very easy going and laid back.
On November 19th 1783 Edward Pigott discovered a comet in Cetus. D/1783 W1 Pigott was the first Englishman to have discovered a comet, and then have it named after him. It was aroung magnitude 6 and has an orbital period of 5.89 years. The comet was then lost. On the night of January 5, 2003, the Lincoln Near Earth Asteroid Research (LINEAR) program located in New Mexico (USA) found an asteroidal object on three images obtained using their 1.0-m telescope. It was then lost again. In 2010 the comet was re discovered again and is now known as 226P/Pigott-LINEAR-Kowalski
Pigotts' and Goodrickes' knowledge of the sky was about to provide a rich harvest. The night of September 10th 1784 was about to become a night to remember. Goodricke discovered Beta Lyra an ellipsoidal variable while Pigott discovered Eta Aquila a Cepheid variable.

After Goodrickes death in 1786 Pigott moved to the city of Bath where in 1795 he discovered the variable star R Scutum and R Corona Borealis the famous star that often disappears from view for months at a time. 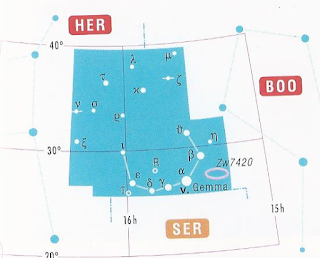 In 1802 while visiting friends in France during a period of peace between the two countries he was detained when war broke out again and placed under house arrest. However after the French government was petitioned by French and British astronomers he was released and given safe passage to Calais where he returned to England.
His last astronomical observations were of the great comet of 1811.
Edward Pigott died on June 27, 1825.