Gemini The Twins
An ancient constellation, Gemini a winter group represents a pair of twins holding hands. They are Castor and Pollux members of the crew of the ship Argo with Jason in search of the golden fleece. The fleece had come from a magic Ram which had been able to fly, after it died its fleece was placed in a sacred grove, guarded by a dragon which Jason killed and he took the fleece back to his own country.
Castor and Pollux were of mixed parentage although both sons of Leda, Castor’s father was king Tyndareus of Sparta while the father of Pollux was the god Zeus. When Castor died, because he was mortal, Pollux begged his father Zeus to give Castor immortality, and he did, by uniting them together in the heavens.
Alpha or Castor at magnitude 1.9 is the second brightest star in Gemini lying 51 light years from Earth, Castor is an A 1 class star with a temperature of around 10,000’c much hotter the Sun at 5,800’C.
Beta or Pollux with a magnitude of 1.1 is the brightest star, Pollux is 34 light years away and is a K0 orange giant star.
There is a minor mystery here because Ptolemy in the 2nd century stated that Castor was brighter than Pollux whereas now it is the other way around, the Arab astronomers agreed with Ptolemy. So if the old astronomers were correct we must suppose that either Castor has faded or else Pollux has brightened up. It seems more likely that the change would have occurred in Pollux.
Gamma or Alhena which means the ‘Shining One’ lies 109 light years away and is of magnitude 1.9, it is an A1 class star.
Eta or Propus which means ‘Forward Foot’ is a M2 red giant star, Propus is a variable star and its brightness changes between 3.1-3.9 over a period of around 230 days. The star lies at a distance of about 320 light years.
Epsilon or Mebsuta which means ‘Outstretched Arm’ shines with a brightness of 3.1 and lies at a distance of 840 light years. It is a G1 class supergiant star.
Delta or Wasat which means ‘Middle’ is a F0 class star lying at a distance of 60 light years away, It shines at a magnitude of 3.5.
Zeta or Mekbuda which means the ‘Outstretched Left Leg ,its a Cepheid variable varying brightness between magnitude 3.7 and 4.1 every 10.2 days, Mekbuda is 1,200 light years away and varies between a F7 supergiant to a G3 supergiant class star.
Mu or Tejat which means ‘Back Foot’ is 230 light years away and is a M3 red giant star that varies very slowly between magnitude 2.7-3.0 in a period of around 70 days.
Messier M 35 is an open cluster around 3,800 light years away containing about 400 stars. M35 can be seen in the sky near eta as a magnitude 5.1 mottled splash of light. 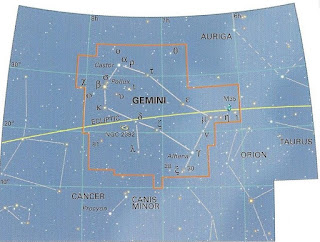