Pictor the Painters Easel
A faint constellation overshadowed by the brilliant star Canopus in Carina to one side and the Large Magellanic Cloud in Dorado on the other. The constellation was invented by Lacaille in the 1750s while in the southern hemisphere . It contains the 9th mag star Kapteyn’s star only 12.7 light years away named after the Dutch astronomer who discovered it in 1897. .
Alpha magnitude 3.3 class A8 temperature 7,000 ‘ C, 97 light years way.
Beta magnitude 3.9 A6 class star 8,000 ‘ C ,65 light years away. Beta is a young star only 20-26 million years old but it appears to be surrounded with planetary forming material. 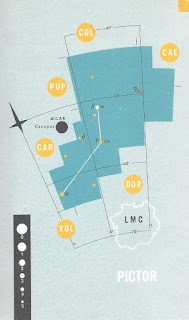