Perseus
Perseus was the hero of Greek mythology who rescued Andromeda who was chained to a rock waiting to be eaten by the Kraken sea monster. Previously he had slained the medusa. The Gorgons eye is marked by Algol. Perseus lies in a rich part of the milky way and is worth sweeping with binoculars.
In 1901 a brilliant nova appeared in Perseus it reached magnitude 0.2 between delta and beta.
Near gamma lies the radiant for the Perseid meteor shower which occurs every August.
Alpha or Algenib which means side or is sometimes known as Mirfak the elbow. It has a magnitude of 1.8 and is a F5 supergiant with a surface temperature of 6,300 kight years and is 510 light years away.
Beta or Algol which means the winking demon is an eclipsing binary star that John Goodricke studied from York in 1782, he realised that there were two stars there eclipsing each other causing the star to change in brightness. The eclipse occurs every 2.8 days and the magnitude varies between 2.2 – 3.5. Goodricke did not discover the variability that was done by the Italian astronomer Montanari in 1669. Algol lies at a distance of 90 light years and has a surface temperature of 13,000’C and is a class B8 star. The star which is eclipsing Algol cannot be seen with the eye.
Zeta magnitude 2.9 is a B1 supergiant with a temperature of 20,500’C and is 750 light years away.
Epsilon also has a magnitude of 2.9 and is a B0. Class star with a temperature of 26,000’C and is 640 light years away.
Rho a semi regular variable varying between magnitude 3.3 and 4.0 with periods of 50, 120 and 250 days. Its a M4 red giant with a temperature of 3,800’C and is 308 light years away.
NGC 869 and NGC 884 Mag 3.7 the famous double cluster sometimes also known as chi perseus. These are open clusters with 350 and 300 stars respectively, lying about 7,600 ly away and about 300 light years apart. 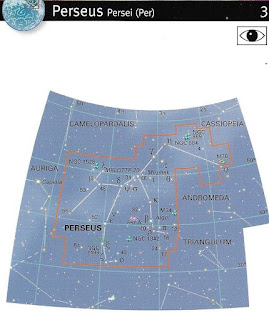