Pavo the Peacock
Introduced by Johann Bayer in 1603 it is one of a series of celestial birds in this region of the sky including Apus, Grus, Phoenix and Tucana. In mythology the peacock was sacred to Juno, goddess of the heavens. According to legend Juno sent a creature with a 100 eyes called Argus to watch over a white heifer; Juno guessed that this heifer was the form into which her husband Jupiter had turned one of illicit lovers the nymph Io.
At Jupiter’s request Mercury decapitated the watchful Argus and released the heifer. Juno place the 100 eyes of Argus on the peacock’s tail.
Alpha also known as peacock magnitude 1.9 spectrum B3 with a surface temperature of 17,000’C lying at a distance 179 light years.
Beta magnitude 3.4 has a spectrum of A5 with a temperature of 8,000’C and is 135 light years away.
NGC 6752 a globular cluster. It is the third-brightest in the sky, with a magnitude of 5.4 after Omega Centauri and 47 Tucanae, NGC 6752 was first identified by one James Dunlop of Parramatta, Australia on 30 June 1826, who described it as an irregular bright nebula which could be resolved into a cluster of many stars, highly compressed at the centre. This corresponds with a core region densely populated with stars around 1.3 light-years in diameter, 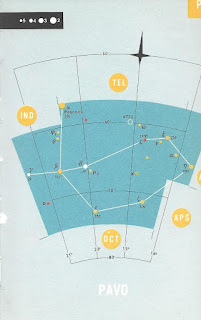