Octans the Octant-Southern Hemisphere
The constellation that contains the South Pole star, despite this privileged position, Octans is faint and unremarkable. There is no southern equivalent of Polaris, the North Pole star. The nearest star to the south celestial pole is Sigma Octantis with a magnitude of only 5.5 which lies about 1 degree from the pole.
The constellation of Octans commemorates the instrument known as the Octant, a forerunner of the sextant, invented by the English astronomer John Hadley and used by him for measuring star positions.
The constellation was introduced by Nicolas Lacaille during his stay at the Cape of Good Hope and its dullness is a memorial to his dreadful lack of imagination.
The brightest star is Nu an orange K1 class giant star with a brightness of magnitude of 3.7 lying at a distance of 64 light years.
Sigma the South Pole Star shines with a brightness of magnitude 5.5 and lies at a distance of 281 light years. Sigma is a FO giant star with a temperature of 7,200’C. 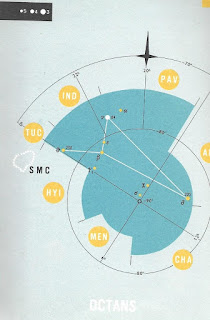