Norma the Level – Southern Hemisphere
A superfluous constellation invented in the 1750s by Nicolas Lacaille who populated the southern skies with several constellations representing scientific instruments, in this case the Surveyor’s Level.
Originally the stars of which it is made were attached to Ara the Altar and Lupus the Wolf. Since Lacaille’s time the outline of Norma has altered, so that the stars that were formerly alpha and beta have now been transferred to the neighbouring constellation of Scorpius.
Norma does lie in a rich region of the Milky Way.
The only star worthy of mention is gamma2 a K0 giant star with a magnitude of 4.0 it has a surface temperature of 4,300’C and lies at a distance of 129 light years.
There are many clusters in the constellation but most are faint
The brightest is NGC 6087 sometimes known as the S Normae Cluster due to the brightest star in the cluster being the variable star S Normae. NGC 6087 is an open cluster containing around 40 stars The cluster appears at magnitude 5.4 with a diameter of 14 light years and is around 3,300 light years away. 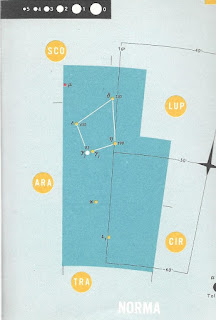