Musca the Fly- Southern Hemisphere
Musca (Latin for "the fly") is a small constellation in the deep southern sky. It was one of 12 constellations created by Petrus Plancius from the observations of Pieter Dirkszoon Keyser and Frederick de Houtman, and it first appeared on a celestial globe 35 cm (14 in) in diameter published in 1597 (or 1598) in Amsterdam by Plancius and Jodocus Hondius.
The first depiction of this constellation in a celestial atlas was in Johann Bayer's Uranometria of 1603. It was also known as Apis (Latin for "the bee") for 200 years.
Lacaille in 1776 renamed it to Musca Australis, the Southern Fly—Australis, to its then counterpart the now discarded constellation of Musca Borealis. The Australis part has now been discarded.
Alpha has a brightness of magnitude of 2.7 and is a class B2 star lying 315 light years away.
Beta lies 340 light years away and has a magnitude of 3.0 its a B2 class star.
Gamma is a B5 class star with a brightness of magnitude 3.9 lying at a distance of 325 light years.
Delta has a brightness of magnitude 3.7 and is a K2 class giant star at a distance of 91 light years. 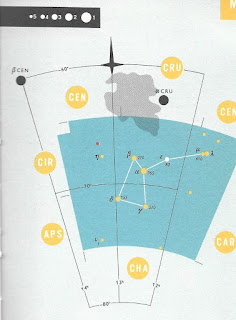