Monoceros the Unicorn
A faint but fascinating constellation between Orion and Canis Minor. Jakob Bartsch, a German mathematician and son in law of Johannes Kepler brought it into general use on his star chart of 1624, although there are references to such a constellation in this position in earlier works by astronomers. Its location in the Milky Way ensures that it is well stocked with nebulae and clusters.
Alpha has a magnitude of only 3.9 and lies 148 light years away. It is a G9 class giant star.
The brightest star is beta at magnitude 3.7, however beta is a system of three stars and under the very best of conditions you might be able to make them out. A pair of binoculars will easily show the three stars. Beta lies at a distance of about 700 light years.
With the Milky Way flowing through Monoceros the area is very rich in faint stars also there are various clusters of stars.
M 50 is an obscure open cluster in an equally obscure constellation Start by using binoculars to find M50 it’s a 6th mag glow in a rich Milky Way field 7 degrees north of gamma Canis Major a 4th mag star about 5 degrees 2 finger widths east of Sirius. Once you have found this snowy looking blur try to see it with the naked eye. If your sky is very clear and dark you might just glimpse it. 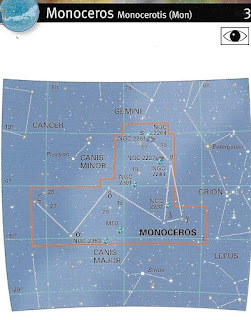