Lupus the Wolf
Lupus is often overlooked by observers because it is so close to the constellation of Scorpius and Centaurus. Although the term Lupus refers to a wolf, the Greeks and Romans regarded this constellation as an unspecified wild animal held by Centaurus as an offering to the gods. It appear to be during the renaissance period that the connection with the Wolf seems to have become the common term to use. Lupus lies in the Milky Way so it is very rich in stars.
Alpha is a magnitude 2.3, B1 class star with a temperature of around 21,000,C compared to that of 5,800,C of the Sun, it lies at a distance of 460 light years.
Beta is a class B2 star even hotter than alpha at 23,500, C it has a magnitude of 2.7 and is 383 light years away. It will quickly use up its supply of hydrogen and become a red giant before possibly becoming a SN in the future.
Gamma is 420 light years away and shines with a magnitude of 2.8 it is a B2 class star.
Eta magnitude 3.4 is 440 light yaers away and is an A5 class star.
Epsilon also magnitude 3.4 and is a B2 class star lying 510 light years away.
There are many clusters in Lupus but require small telescopes to see them.
In the year 1006 a supernova appeared in Lupus, SN 1006 was probably the brightest observed stellar event in recorded history, reaching an estimated −7.5 visual magnitude and was roughly sixteen times the brightness of Venus. Appearing between April 30 and May 1. The Supernova was seen for about 3 months in the sky. 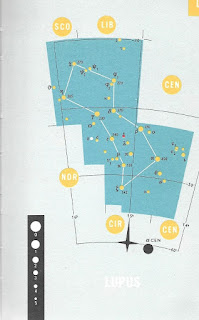