A small faint constellation of the zodiac, the ancient Greeks knew it as the ‘claws of the scorpion’ an extension of the neighbouring constellation of the Scorpion. However the Romans made it a separate constellation at the time of Julius Caesar. Since then the scales of Libra have come to be regarded a the symbol of justice held aloft by the goddess of justice Astraea.
Alpha or Zubenelgenubi which means the ‘Southern Claw’ is actually the second brightest star with a magnitude of mag 2.7 lying at a distance of 77 light years. Zubenelgenubi is a F3 class star. A pair of binoculars will reveal that alpha is actually a double star.
Beta or Zubeneschamali or ‘Northern Claw, is actually the brightest star at magnitude 2,6 lying at a distance of 185 light years. Zubeneschmali is a B8 class star. 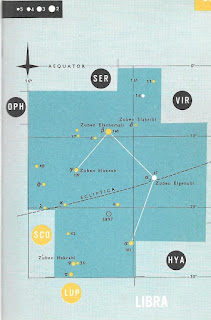