Lepus the Hare
A constellation known to the ancient Greeks, it represents a hare cunningly located at the feet of Orion. The Hare was placed in the sky for Orion to Hunt.
Alpha or Arneb which means ‘Hare’ is a magnitude 2.6 star, it is a F0 supergiant star lying at a distance of 2,200 light years. It will end its life as a supernova.
Beta or Nihal which means ‘Quenching their Thirst’ is a magnitude 2.8 star lying at a distance of 160 light years. It is a G5 giant class star.
Epsilon has a brightness of magnitude 3.2 its an orange K4 giant star 213 light years away.
R sometimes called Hind's Crimson Star, its a well-known variable star. It is named after famous British astronomer J. R. Hind, who observed it in 1845. Its magnitude varies from +5.5 to +11.7 with a period of 418–441 days. R lies around 1,300 light years away. 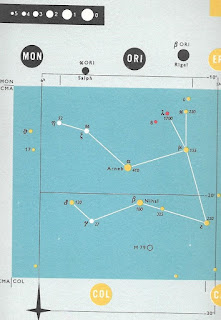