Leo the Lion
One of the few constellations that looks like the figure it is supposed to represent in this case a crouching lion. The Lion’s head is outlined by a sickle shape or backwards question mark at the bottom of which is the bright star Regulus.
This is the lion that is slain by the hero Hercules as the first of his 12 labours.
Leo is a large and bright constellation in the spring sky with many stars and galaxies of interest.
Alpha or Regulus which means ‘Prince or Little King, lies 79 light years away, it has a brightness of magnitude 1.4 Regulus is a B8 class star with a surface temperature 12,000’C, much hotter than our Sun at 5,800’C.
Beta or Denebola which means ‘Tail of the Lion’ with a brightness of magnitude 2.1 Its an A3 class star lying at a distance of 36 light years.
Gamma or Algeiba which means ‘Lions Mane’, is an orange class K0 giant star with a magnitude of 2.1 and is 130 light years away.
Delta or Zosma which means ‘Girdle or hip’ is an A4 class star lying at a distance of 58 light years, Zosma has a magnitude of 2.6.
Wolf 359 is one of the nearest stars to the Sun; only the Alpha Centauri system (including Proxima Centauri), Barnard's Star and the brown dwarfs Luhman 16 and WISE 0855−0714 are known to be closer. Its only 7.3 light years away, Wolf 359 is a red dwarf of class M6 with a temperature of around 2,000’C. It is so faint it only has a magnitude of 13.5 meaning a large telescope is needed to find the star.
Wolf 359 has been mentioned in several science fiction works
The Dark Side of the Sun (1976), a novel by Terry Pratchett.
There are four messier galaxies in Leo M65,M66,M95 and M96 all require telescopes to be seen. 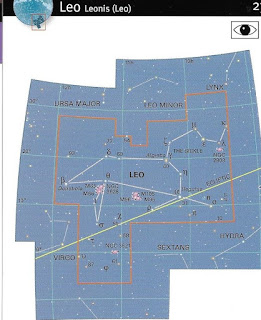