Lacerta the Lizard
Another inconspicuous constellation sandwiched between Cygnus and Andromeda, introduced to the sky by Johannes Hevelius in 1687.
The only bright star is alpha with a magnitude of 3.8, its a A1 class star lying at a distance of 103 light years.
There were other suggestions for constellations in this area, the Sceptre and Hand of Justice created by the French astronomer Augustin Royer in 1697 to commemorate King Lous XIV. The German astronomer Johann Bode in 1787 called this area Frederick’s glory in honour of King Frederick II of Prussia. Both have been discarded in favour of Lacerta. 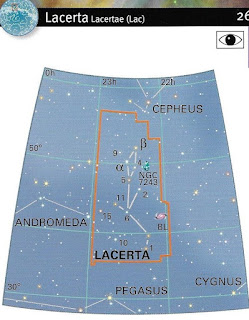