Indus the Indian - Southern Hemisphere
This constellation was proposed by the Dutch navigator /astronomer Peter Keyser in honour of the natives of America at the end of the 16th century. It was introduced to stellar maps by Johan Bayer in 1603.
As in the case of many other modern constellations it is hardly possible to shape the sparsely dispersed stars into the figure of a North American native.
Alpha has a magnitude of 3.1 and lies at a distance of 98 light years, the star is a K0 giant star.
Beta is fainter with a magnitude of 3.7, its an orange K1 class giant star lying 600 light years away. 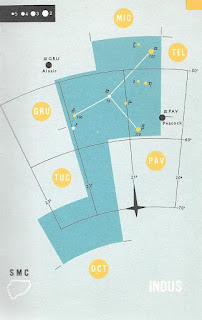