Hydrus the Lesser Water Snake
It was one of twelve constellations created by Petrus Plancius from the observations of Pieter Dirkszoon Keyser and Frederick de Houtman and it first appeared on a 35-cm (14 in) diameter celestial globe published in late 1597 (or early 1598) in Amsterdam by Plancius and Jodocus Hondius. The first depiction of this constellation in a celestial atlas was in Johann Bayer's Uranometria of 1603.
This is a smaller southern hemisphere version of the great water snake, Hydra. Hydrus is sandwiched between the two Magellanic clouds and almost bridges the gap between Eridanus and the south celestial pole. Alas it is not a very bright constellation.
The brightest star is beta with a magnitude of magnitude 2.8 lying at a distance of only 25 light years. Beta is a G2 class star.
Alpha is the second brightest star with a magnitude of 2.9, its a FO class star lying at a distance of 72 light years.
Gamma with a magnitude of 3.3 is a M1 class red giant star it is located at a distance of 214 light years.
Located mostly in Dorado, the Large Magellanic Cloud also extends into Hydrus 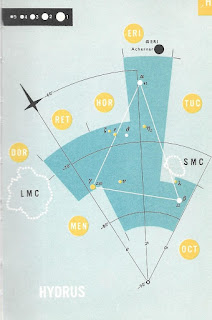