Hercules -  Summer Sky
Hercules represents a Greek mythological hero famous for his 12 labours, Hercules is the 5th largest constellation and because of the legends associated with Hercules it should be a very prominent constellation sadly its not.
It is in a very confusing part of the sky there are no bright marker stars but essentially it is made up of a quadrilateral of stars between Vega and Corona Borealis.
Alpha or Rasalgethi which means ‘Head of the Kneeler’, Rasalgethi is a semi regular variable star varying in brightness between magnitude 2.7-4.0 in a period of between 80-140 days. It is a M5 red supergiant star lying at a distance of 360 light years.
Beta or Kornephoros which means ‘Club Bearer’ lies at a distance of 139 light years. The star is a class G7 giant star, and has a magnitude of 2.8.
Zeta also has a magnitude of 2.8, it is a F9 class star, it is fairly close to us lying at a distance of only 35 light years.
Delta at magnitude 3.1 lies at a distance of 75 light years and is an A3 class star.
Eta has a brightness of magnitude 3.5 and lies at a distance of 112 light years and is a G7 giant class star.
Located below eta is Messier 13 which is probably the finest globular cluster in the northern hemisphere, it can be seen with the naked eye when it is high up in the summer months.
M13 contains anywhere from 300,000 to 500,000 stars spread out over 140 light years. It is relatively close to us at around 23,000 light years. It you have a very clear dark sky M13 can be seen as a magnitude 5.3 object and has been described as a fuzzy looking star.
M13 is sometimes called the Great Globular Cluster in Hercules If you have a small telescope M13 is fantastic to look at. It is always a target for astro- photographers. 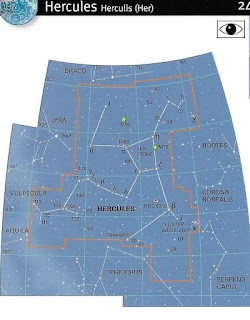