Grus the Crane Southern Hemisphere
Grus is a constellation in the southern sky. Its name is Latin for the Crane, a type of bird. It is one of twelve constellations conceived by Petrus Plancius from the observations of Pieter Dirkszoon Keyser and Frederick de Houtman. Grus first appeared on a 35-cm (14 in) diameter celestial globe published in 1598 in Amsterdam by Plancius and Jodocus Hondius and was depicted in Johann Bayer's star atlas Uranometria of 1603.
The constellation, a southern group and lies beneath the bright star Fomalhaut in the constellatioins of Piscis Austrinus. Grus cannot be seen from Britain.
Alpha or Al Nair which means the ‘Bright One’ shines at a magnitude of 1.7 and is 101 light years away, Al Nair is a B6 class star much hotter than the Sun.
Beta is a red giant of class M5 making it much cooler than the Sun, and is around 170 light-years from Earth. Beta varies in brightness between magnitude 2.0- 2.3.
Lying in the north-west corner of Grucis is the star beta which shines at magnitude 1.6 and it marks the eye of the crane. Beta is a M3 class red giant and lies 88 light years from Earth. 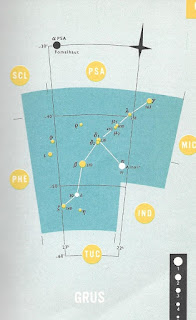