Fornax the Furnace
Fornax is a constellation in the southern sky, originally part of Eridanus and partly ringed by the celestial river Eridanus. Its name is Latin for furnace. It was named by the French astronomer Nicolas Louis de Lacaille in 1756.
Fornax is a very barren constellation which is just visible from Britain.
The only star worth mentioning is alpha at magnitude 3.9. Originally designated 12 Eridani by John Flamsteed in the 1670s , alpha was named by Lacaille as the brightest star in the new constellation. It is a F8 class star lying at a distance of 46 light years.
Although the constellation has little to offer to the naked eye observer there is a wealth of galaxies to users of large telescopes.
Unknown to Lacaille the constellation contains The Fornax Dwarf galaxy which part of the Local Group of galaxies.
There is the Fornax cluster of galaxies 60-80 million light years away, the cluster contains around 60 galaxies. 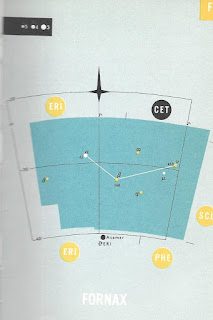