Eridanus the River
Eridanus is the 6th largest constellation in the sky but is often overlooked by its faintness. It meanders from Taurus in the north to Hydrus (lesser water snake) in the south.
In mythology Eridanus was the river into which Phaethon fell after trying the chariot of his father the Sun god.
Originally Eridanus contained the stars that now form Fornax the Furnace.
The brightest star alpha or Achernar which means ‘The End of the River’ is at the very end of the constellation in the south and is invisible from Britain. Achernar is the 9th brightest in the sky and is 139 light years away and is a B6 class star with a surface temperature of around 14,500’C.
Beta or Cursa which means the’ Footstall of the Central One’ referring to its position under the foot of Orion. Cursa is of magnitude 2.8, it is an A3 giant class star and it lies 89 light years away.
Gamma or Zaurak which means ‘Boat’ is a red giant star of class M3 and lies at a distance of 203 light years. It has a magnitude of 2.9
Delta or Rana the meaning of which is uncertain is a star of magnitude 3.5 and is an orange K0 class star, delta is 29 light years away.
Epsilon with a magnitude of 3.7 lies just 10.5 light years away. It is an orange K2 class star. Epsilon is cooler than the Sun with a surface temperature of only around 4,600’C compared to the Sun with a temperature of 5,800’C.
Epsilon is a popular locale in science fiction. It has been featured in novels by Isaac Asimov and Frank Herbert, among others. it is the location of the featured space station in the TV series Babylon 5. 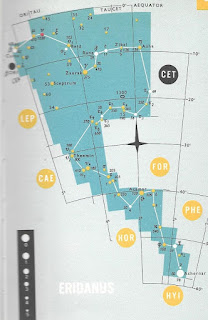