Lyra the Lyre
A constellation dating back to ancient times Lyra represents a stringed instrument invented by Hermes and given by his half-brother Apollo to Orpheus. Although a small constellation it is a very prominent one. Its brightest star Vega is the 5th brightest star in the sky and it is one of the summer triangle star, the others being Altair in Aquila and Deneb in Cygnus.
In around the year 14,000 AD Vega will become the North Star due to the precession of the Earth.
There is a meteor shower the Lyrids which appear around April 21-22 with around 15 per hour.
Alpha or Vega which means the ‘Falling Eagle’ is a magnitude 0.0 (zero) star. It is relatively close at only 25 light-years from the Sun,it is an A0 class star with a surface temperature of 9,200’C .
Beta or Sheliak which means ‘Lyra’ is an ellipsoidal variable discovered in September 1784 by John Goodricke, the stars are so close together that they are egg shaped due to the gravity of the two stars pulling at each other. To the naked eye Sheliak appears as one star.The two stars orbit each other every 12.9 days and the magnitude changes from 3.4-4.3. Sheliak is 960 light yeas away and is a B7 giant star.
Gamma or sulufat which means ‘Turtle’ is the second-brightest star with an apparent visual magnitude of 3.3 it lies 620 light years away and is a B9 class giant star.
Epsilon is the famous the double double, epsilon 1 shines with a magnitude of 4.7 while epsilon 2 in 4.7. They are around 162 light years away. Both stars can be seen with the naked eye under good conditions while of course binoculars will easily show both stars. A small telescope or binoculars will reveal that each star itself is a double star. Epsilon 1 and 2 are both A class stars hotter than the Sun.
M57 the famous ring nebula is a planetary nebula lying between beta and gamma M 57 is magnitude 8.8 and needs either very good binoculars or a telescope to see it and it lies around 2,300 light years away. 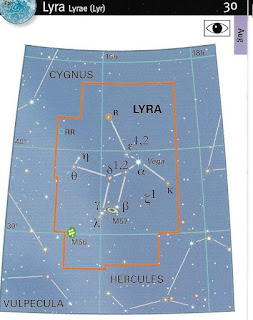