In 1653 the year that Oliver Cromwell became Lord Protector in England Abraham Sharp was born in Horton Hall Little Horton Bradford. His family were farmers and were involved in the woollen industry which most people in this area of Yorkshire would have been involved in. He went first to the local school in Little Horton then onto Bradford Grammar School where he showed how good he was at mathematics. His father had hoped that Abraham would follow him into the wool trade and at sixteen was sent to York to become an apprentice dealer in wool. This was not for Abraham Sharp he left York and moved to Liverpool where he opened a school and taught writing and accounts. He also spent the years from 1670 when he left York until 1684 when he moved to London teaching himself navigation, mathematics and understanding how to make scientific instruments. In fact his skill at making instruments was such that he was the first person in England to make telescopes which had any degree of accuracy.

This pattern is so familiar with astronomers from Yorkshire teaching themselves everything they needed to know, first we had John Gascoigne, then Sharp and later Thomas Cooke.

Around this time the future first Astronomer Royal, John Flamsteed was also in Liverpool and it is most likely that their joint interest in mathematics must have by chance brought them together possible through the classes that Sharp was offering in mathematics. The meeting must have been brief because in the same year that sharp moved to Liverpool, John Flamsteed moved to London, however sharp’s mathematical skills must have made an impression on Flamsteed because he would later employ Sharp as his assistant at the Royal Greenwich Observatory.

After the English Civil War and the restoration of the monarchy with King Charles II in 1660, England was quickly becoming a seafaring nation with an expanding empire, maps of the time were not very accurate but it was important that sailors could work out their longitude and latitude to work out their position.

King Charles II may have had his little weaknesses but he did have an interest in science and to allow sailors to find their location when exploring the oceans this required a new and accurate map of the night sky. He decided in 1675 to build an observatory to allow an astronomer to produce this new star chart. The site chosen was the Royal Park at Greenwich, with the observatory being designed by Christopher Wren.

John Flamsteed was twenty nine when he was appointed as Astronomer Royal and as with all government funded posts his income was just £100 per year which even by seventeenth century standards was not a large amount. Flamsteed needed an assistant to help him, but he had little spare money to pay a salary. The individual would have to be a good mathematician. It is unclear what made Sharp take up the offer of working in London for no pay, maybe it was the fact that he was going to be working at Greenwich which at the time was one of the most important observatories in the world.

We know that in March 1684 Sharp took a boat from Liverpool to London and stayed at John Flamsteed’s house during 1684-85 undertaking various astronomical observations. Things were so difficult financially that he sometimes had to rely on his family sending him money. One up side of working in London at Greenwich was that he would almost certainly have met two of the scientific giants of the time, Isaac Newton and Edmund Halley.

Sharp carried on working as his assistant until 1688 and it was in that year Flamsteed employed Sharp to construct a mural arc, an instrument that would allow the positions of the stars to be accurately measured. Flamsteed admired the workmanship of Sharp and others who saw his work and admired his accuracy and craftsmanship. This applied to all of the instruments that Sharp produced. He sometimes found himself having to make the tools to construct the equipment he was constructing. Earlier Sharp had re aligned the original mural arc to make it more accurate but this was clearly only a temporary repair. The work of the Royal Greenwich Observatory only really began after the construction of the Sharp Mural Arc. It was this instrument made by a Yorkshireman that allowed the star map and catalogue, the Historia Coelestis Britannica to be completed. 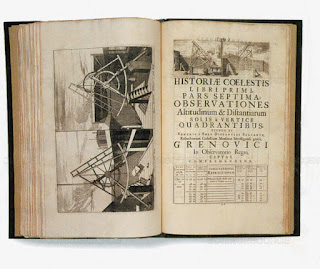 This was the first major scientific contribution from the Royal Greenwich Observatory. It took over thirty years to complete and Abraham Sharp was involved with the star chart right from the beginning until the time it was completed. The first recorded observation was made on 11 September 1689 and the last on 27 December 1719. The star map was finally published in 1725 which was after the death of Flamsteed he had died in 1719. Listed were more than 3,000 stars and their positions much more accurately positioned than did any other previous work. Unfortunately history gives very little credit to Abraham Sharp in this work which took fourteen months' to construct and cost over £120. Although Flamsteed observed the stars without the mural arc the project could not have been completed. It should not be considered that Sharp and Flamsteed were not friends they were it was that the star atlas was published after the death of John Flamsteed’s by his widow, and she made no reference to all the work that Sharp had put into the making of Historia Coelestis Britannica.

On the death of his eldest brother, he returned to Horton Hall in 1694, where he remained for the rest of his life. He would complain that there were very few people who lived locally that he could have interesting conversations with. He continued to have an interest in mathematics, astronomy and instrument making and is believed to have adapted the Hall’s central tower to create an observing platform.

It is said that he did not like to be disturbed while working and there was a sliding panel where servants could leave meals so as not to disturb him. This is not to suggest that he was a recluse far from it. He had a very generous nature, there is an account of him giving a poor sick man £1 and 11 shillings because when he spoke to him he knew about navigation. To give some idea today that would be the equivalent of about £660!.

He carried on a considerable correspondence with Flamsteed and in 1704, made him a micrometer. This was the kind of instrument that had been earlier invented by William Gascoigne. In 1705 Sharp accepted the post of Calculator he would be checking all the measurements made by Flamsteed for this post he was paid about £40 a year and began working on the preparation of material for Flamsteed’s Historia Coelestis. This seems a small amount for such an important job but Sharp was by now receiving a large income from his estate and he was careful with his finances. Another Yorkshire being careful with his money!

There are conflicting reports as to whether he observed the transit of Mercury in 1707; the only definite although poorly reported observation was from Ole Roemer in Denmark. Roemaer was the first person to calculate the speed of light. We know that Sharp was a very careful and methodical person so either he made a spurious report or possibly he was seeing a rare large sunspot. This was still at the time of the Maunder Minimum the period when there were very few sunspots and the temperature of the Earth was so low that Europe experience a ‘little ice age’

It is sad to report that neither Horton Hall nor Flamsteed’s Mural Arc survive. Horton Old Hall was demolished in the 1960s to make way for car park for St Luke’s Hospital. The Mural Arc was removed from the Observatory in 1720 by Flamsteed’s wife. Apparently still in existence in 1721, it then disappears from the records.

Abraham Sharp died a bachelor in 1742 in his ninetieth year in Little Horton, his claims to fame are many, he was one of the top instrument makers of his day, his maths skills were so good that he was this generation’s version of Henry Briggs from the last century.

There is still one part of the Abraham Sharp story to tell and that is that by chance in 1835 William Newman a member of the Yorkshire Philosophical Society just happened to be at a sale in Leeds when he came across a number of objects that had belonged to Sharp, he met with someone who had purchased the material which included a telescope without knowing what was there. Newman realising that the telescope was of some importance and value convinced the buyer that it was of no real value and obtained the telescope after a little bit of adroit negotiating!

The telescope was of a bespoke design and was made in1700 and was used by Sharp at Horton Hall it is described as Abraham Sharp’s Universal Instrument which combined the functions of both an altazimuth and equatorial mounting.

As most people are aware the Earth is a sphere and as we look up into the sky the stars and planets appear to rise in the east follow a curved path across the sky and then set in the west. If a telescope has an altazimuth mount it can be moved in an up and down motion, this means following objects having a curved path is quite difficult, while an equatorial telescope mount allows the telescope to follow a curved path in the sky making it much easier to follow an object. Although not the first equatorialy mounted telescope it was one of the earliest. The accuracy of this instrument allowed him easily to locate the objects in the sky.

William Newman donated it to the Yorkshire Museum where sadly it remained in store for many years attracting very little interest. It was described by Sidney Melmore in a paper in the Observatory magazine in 1938 and in 1963 was loaned to Bolling Hall Museum in Bradford to commemorate Abraham Sharp.

In the early 1970s the instrument was sent on permanent loan to the National Maritime Museum in London where it is still housed.