Today is the 160th anniversary of the unveiling of the telescope made for Prince Albert. It was described as a ‘Magnificent Astronomical Instrument’.

The firm of Thomas Cooke & Sons of York displayed the telescope that had been made for HRH the Prince Consort. Prince Albert being interested in science and having heard of the excellent optical work by Thomas Cooke expressed a desire to meet someone from the company.

Mr Cooke travelled at once to Osborne House on the Isle of Wight to meet Prince Albert in person. He obtained an order for the telescope while there.

The telescope which was described as magnificent had a lens of 5.5 inches aperture and was housed in a tube 6.5 feet long. It was mounted on a stout tripod stand of polished mahogany.

It is also provided with another stand, permanently fixed in position, composed of iron and polished granite, designed to form an elegant and ornamental pillar, including a cover to protect the instrument when not in use. 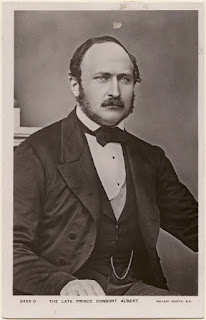