Mercury is the closest planet to the Sun in our solar system and there will be times that it will pass in front of the Sun and can be seen as a small dot slowly moving across the face of the Sun. This is a Transit of Mercury, they occur on average 13 times per century, the last was in November 2019 the next will be in 2032.

Here is a little gnome astronomical fact, two transits of Mercury separated by 46 years which occurred on the same date and were both seen using Cooke of York telescopes.

The transit of Mercury on May 7th 1878 (it was May 6th in the UK) was observed at 06 hours and 40 minutes as the Sun rose in Australia, with Mercury already half way across the surface of the Sun, this observation was made by W J MacDonnell at Sydney using a 4.25 inch Cooke telescope.

Then 46 years later in 1924 also on May 7th A F Bennett this time using a 6 inch Cooke telescope started observing a Transit of Mercury from 16 hours and 57 minutes from his home in Suffolk.

Although he lived in Suffolk he was actually born in Goole East Yorkshire and was educated at Bramham College. 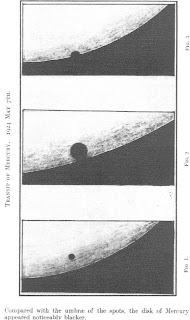