Edward Crossley was a wealthy industrialist who owned the Crossley Carpet Mill in Halifax, Yorkshire. In April 1867 he purchased a 9.3 inch telescope from Thomas Cooke of York, the telescope would be used for over 30 years in Halifax, upon Crossley’s death in 1905 the telescope was brought by the Rev. David Kennedy in New Zealand, it was placed in an observatory at Meeanee, it was at the time the second largest telescope in New Zealand. This is the Crossley Telescope. 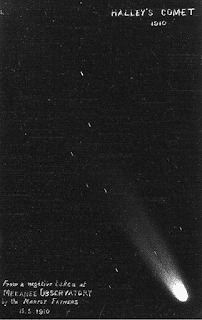 In 1910 Halley’s comet returned to the skies and on the 15th May 1910 the Crossley 9.3 inch telescope was used to take a photograph of the comet from the Meeanee observatory.