In 1910 everyone was waiting for the return of the most famous of all comets, Halley’s. Among the many observatories that observed Halley’s comet was the Transvaal Government Observatory in South Africa from April 11th until June 3rd 1910.

This particular photograph was taken on May 1st 1910 using the 10 inch Cooke lens that had originally been made for John Franklin Adams. On this photograph which had an exposure time of 30 minutes, showed the tail of the comet being 15 degrees long. 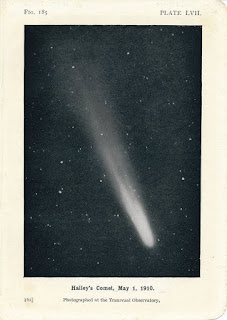 John Franklin Adams ordered a special telescopic camera from Thomas Cooke and Sons of York in 1898 in order to complete a photographic survey of the night sky. The battery of cameras was mounted on an English Mount and comprised of 1 x10 inch camera and 2 x 6 in cameras. It would be between 1903-1909 he used these cameras to photograph the northern hemisphere stars from Godalming in Surrey and the southern hemisphere stars from South Africa.


Due to ill health John Franklin Adams was not able to undertake any further astronomical photography so in 1909 he presented the 10 inch camera to the Transvaal Observatory which began using the Cooke camera in April 1910 just before the arrival of Halley’s comet.

The photographic plates were so good that there was nothing better until the Palomar survey of the 1950s. Even today the Franklin Adams plates are used as references by astronomers.

Halley’s comet was not discovered by Edmund Halley he observed it in 1682 and noted that it followed similar paths across the sky as did the comets of 1531 and 1607. He predicted it would return in 1759 which he did and it was so named in his honour for his prediction.