Joseph Baxendell and the Blaze Star

On May 12th 1866 Baxendell together with several other astronomers discovered a bright star appear in the constellation of Corona Borealis. This was a nova and it reached a magnitude of 2.0 which is as bright as bright as the North Star.

The word Nova comes from the Latin meaning New when in the middle ages astronomers thought these were new stars being created.

A nova is not a new star but a double star system one small hot star and one larger but less massive star, the hot small star pulls gas from the less massive star this will fall onto the hot surface and be thrown into space. The star then brightens and appears in the sky, this is a nova.

There is every possibility that he may have seen it a few days earlier on May 7th when he was checking all known variable stars to naked eye visibility.

The nova later designated T Corona Borealis would become known as the Blaze Star because in 1946 it went novae again and it reached magnitude 3.0. This was the first nova known to do this . It became the first of what astronomers now call re current novae, although Baxendell could not know of this. 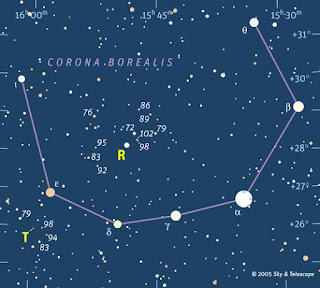 Astronomers now know that all nova are recurrent and that they can brighten up over a period of decades or centuries.