Aries the Ram - Northern Hemisphere
A constellation that dates back to ancient times, in legend Aries represented the Ram whose golden fleece was sought by Jason and the Argonauts. Despite not being a very bright constellation it has assumed great importance in astronomy, because around 2,000 years ago it contained the point where the Sun passed from south to north across the celestial equator each year. This point, the vernal equinox marked the start of spring in the northern hemisphere.
This point is known as the first point of Aries. However because of the slight wobble of the Earth which is called precession this point has now moved into the neighbouring constellation of Pisces. Having said that we still call it the First Point of Aries.
The brightest star, alpha is called Hamal which means ‘The Head of the Sheep’,it shines at magnitude 2.0 the same brightness as the North Star. Hamal lies 66 light years away and is a K1 giant with a surface temperature of 4,200’C compared to 5,800’C of the Sun.
The next brightest star is beta which is called Sheratan meaning ‘The Sign’, and is 60 light years away it has a magnitude of 2.7. Sheratan is an A5 class star with a temperature of 8,700’C much hotter than the Sun.
A line drawn from Hamal and to the left and upwards slightly will reach the third brightest star in Aries. This is 41 Arietis. I know I have said that the brightest 24 stars of each constellation have a Greek letter allocated to them. The first Astronomer Royal John Flamsteed (1646-1719) undertook a survey of the night sky and gave every naked eye star in a constellation a number, evens stars which have a Greek letter.
41 Ariets has a magnitude of 3.6 and is a B9 class star hotter than our Sun and is 166 light years distant. The star does not have a Greek letter because it was originally part of a now defunct small constellation called Musca Borealis the Northern Fly.
Just below beta you will find gamma or Mesarthim the meaning is unknown, its magnitude is 3.9 and is 164 light years away Mesarthim is a B class star much hotter than the Sun. The star used to be called ‘The First Star of Aries’ as it was the closest visible star to the vernal equinox. 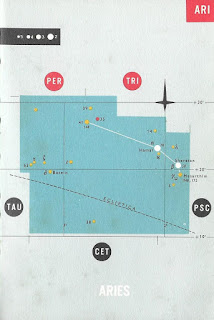