Bootes the Herdsman - Spring Sky
The constellation of Bootes is usually described as the Herdsman who was placed in the sky for inventing the plough drawn by two oxen. The way to pronounce Bootes is to think of the word co-ordinate. Bootes is very prominent in the spring and early summer skies. It is always a little bit difficult to work out the best shape to describe Bootes because it is a large constellation and it is in a fairly barren part of the sky.
The brightest star alpha or to give its proper name, Arcturus is also the brightest star in the northern hemisphere at magnitude 0. 0 and its name means the ‘Bear Keeper’. Arcturus is an orange K0 class giant star 37 light years away. It is cooler but larger than the Sun.
Every star has its own story but some are more curious than others. The bright orange star Arcturus, which can be found by following the curve of the handle of the Plough around and down, has an electrifying story with a twist involving the 1933 ‘Chicago Century of Progress Exposition’ in America.
Chicago had hosted its first big fair in 1893. At the time it was believed that Arcturus was forty light years away, so when the second Exposition was planned for 1933, forty years after the first, it was decided to use the light from Arcturus to switch on the lights to the exhibition.
A photcell is an electronic device that produces electricity when light falls upon it. On May 27th 1933 the light which left Arcturus in 1893, taking 40 years to reach earth, was channelled through a powerful telescope and directed on to a photocell to switch on the lights for the Exposition. Everything worked perfectly, except that today we know that Arcturus is only 37 light years away, not 40. The light had left the star not in 1893 but in 1896!
You might remember that I explained in the introduction to the constellations that the brightest 24 stars in each constellation have a Greek letter assigned to it with the brightest being alpha and the 24th least bright omega. I also said that sometimes this does not follow and Bootes is another good example.
The second brightest star is epsilon which is the 5th letter of the Greek alphabet and has a magnitude of 2.4. Epsilon or Izar which means the ‘veil’. Izar is a K0 giant cooler than the Sun and is 203 light years away.
Gamma is an A7 class star hotter than the Sun, it has a magnitude of 3.0 and is 87 light years away. Gamma is sometimes known as Seginus the meaning of which is unknown.
The only other bright stars are Beta or Nekka meaning ‘Herdsman’ and is a magnitude 3.5 star and is 225 light years away. Nekka is a G8 giant slightly cooler than the Sun.
The final star to mention is delta which is also a magnitude 3.5 star and is 122 light years away and is also a G8 giant star.
There is one important meteor shower that can be seen comingfrom the constellation of Bootes. This is the Quadrantids usually around the 4th January. There can be between 60-100 meteors per hour seen in the sky, however with this shower that peak of activity will only last for a few hours rather than the whole night.
If you look up into the sky on any clear night you will be unlucky not to see at least one meteor or shooting star as some people like to call them. These meteors have nothing at all to do with stars. They are the tiny grains of dust that are left behind by a comet or an asteroid as it travels around the Sun. If the Earth happens to cut across the path of one of those trails of dust left by comets we see lots of meteors in the sky. This is called a meteor shower, there are several prominent ones each year. We see the meteors when they burn up as they enter the atmosphere of the Earth and for just a moment we see a streak of light dash across the sky.
The Quadrantids are associated not with a comet but an asteroid 2003 EH1.
The Quadrantids take their name from the now defunct constellation of Quadrans Muralis the Mural Quadrant which has now vanished from modern constellations. It was created by the French astronomer Jérôme Lalande in 1795. It was located between the constellations of Boötes and Draco, near the tail of Ursa Major or Great Bear.
Don’t forget if you see a meteor you must make a wish!! 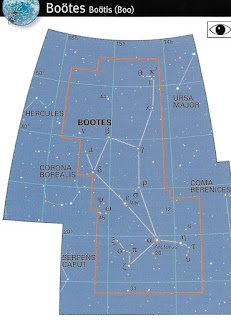