Auriga the Charioteer -  Northern Hemisphere
A striking constellation in the northern skies, Auriga lies above the horns of Taurus the Bull and forms the shape of a kite. Auriga is named after the son of Vulcan who invented the four horse chariot. Its brightest star Capella is the 6th brightest star in the sky.
In 1899 astronomers discovered that Capella was not a single star but a double star. Like so many stars that appear single to the eye, Capella actually consists of two stars. But there's more going on with Capella as there is another component to this system, a pair of small red stars, meaning that where we see just one star there are actually 6!!
Capella whose name means the ‘Little She Goat’ has a magnitude of 0.1 and its a class G3 giant slightly cooler than our Sun which is a G2 dwarf and is 43 light years distant.
In brightness it is virtually equal to Vega in the constellation of Lyra the Lyre but it is of a very different colour, its yellowish tinge contrast sharply with the steely blue of Vega. Both are circumpolar from Britain, they can be seen all year round. They lie on opposite sides of the north pole star and at roughly the same distance from it. This mean that when Capella is high up Vega is low down and vice versa. From Britain Capella is overhead during winter evenings while in summer it is Vega that occupies that position. When at their lowest they are very low just above the horizon.
Slightly to the right and just below Capella is a little but quite distinct triangle of stars called the Haedi or the kids. They are referred to as the Kids because where the she goat goes the kids will always follow!! The top star in the triangle is epsilon, bottom left star is eta and the bottom right is zeta.
Epsilon is a F0 supergiant white star its distance in not known with any great certainty but it could be about 2,000 light years away. It normally it shines at around magnitude 3.0 but every 27 years it fades to magnitude 3.8 where it remains for between 640–730 days – about two years. Epsilon is eclipsed by an unseen and unknown very large companion star. The star’s last dimming was from 2009 to 2011. The next should begin around 2038!
Zeta is another eclipsing binary where the companion star cannot be seen with the naked eye and varies between magnitude 3.7-4.1 over a period of 972 days. Zeta is a K5 class giant star lying 790 light years away.
The third component eta which is 243 light years away. It is a B3 class star making it much hotter than the Sun, and has a brightness of magnitude 3.2.
Beta or Menkalinan which means ‘Shoulder of the Charioteer’, is the second brightest star in Auriga and is found to the left of Capella with a magnitude of 2.0 the same brightness as the North Star. It is an A1 class star with a surface temperature of around 9,000` C much hotter than our Sun. It lies at a distance of 82 light years.
A line drawn down from beta will reach the star theta or Mahasin with means the ‘Wrist of the Charioteer’. Theta has a magnitude of 2.6, and is an A class star 166 light years away.
From eta which is the top star of the Haedi or kids a line drawn down and past zeta will come across iota or Al Kab which means the ‘Shoulder of the Rein holder’ at a distance of 490 light years we see iota as a star of magnitude 2.7. It is a K3 giant being cooler than our Sun.
In 1930 for some reason the star that was originally classified as gamma Aurigae was transferred to the constellation of Taurus the Bull and re labelled at beta Tauri. It makes no sense at all as it is the bottom of the kite shape which used to form Auriga. 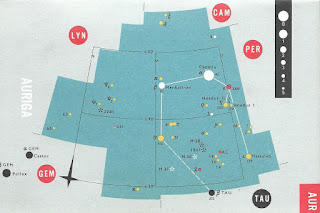