Ara the Altar
Ara the Altar lies in a dense part of the Milky Way immediately south of the hook of stars that make up the tail of Scorpius the Scorpion. It is invisible from Britain but has been known since ancient times, remember that many of these constellations were created in Greece which is much further south than we are in Britain meaning that constellations like Ara will be seen much higher in the sky.
Although a relatively minor group with no named stars in Greek mythology, Ara represented the altar used by Zeus and other Greek gods to swear a vow of allegiance before they went to war against Cronus and the Titans. According to legends, it is believed the Cyclops originally built the altar as a place to sacrifice to the Olympian gods. It was also upon this altar that Centaurus the centaur sacrificed Lupus the wolf. Ara has a fairly distinctive shape, its brightest stars are:-
Alpha , the second brightest star can be found below the bright star theta in the tail of the Scorpion. Alpha has a magnitude of 2.9 and is 270 light years away. It is a B class star with a surface temperature of around 17, 700 degrees C compared to 5,800 degrees C of our Sun.
A line drawn down from alpha leads to beta, the brightest star in Ara which has a magnitude of 2.8 and is 650 light years distant. It is a K class super giant star with a surface temperature of 3,800 degrees C indicating it is cooler than our Sun.
Just underneath beta is gamma, located 1110 light-years from Earth, and is a B1 class supergiant with a whopping surface temperature of 21,200 ‘ C with a magnitude of 3.3.
Continuing a line further down we reach delta with a magnitude of 3.6 it’s a B 8 class star indicating that it is much hotter than the Sun. Delta lies 198 light-years from Earth.
A line drawn from beta to the right will lead you to zeta the third brightest star in Ara with a magnitude of 3.1. Zeta is a K3 giant star with a surface temperature cooler than the Sun, It lies 490 light years away.
From zeta a line drawn down and slightly to the right leads to eta which is about 299 light years away, eta is somewhat fainter of the other stars with a magnitude of 3.8. Another K class star this time it is a K5 type.
Since Ara contains part of the Milky Way to the south of Scorpius, it therefore has rich in clusters of stars.
Ara gives us the chance to view the two types of clusters we see in the sky both are just visible to the naked eye if the sky conditions are very good. Open Clusters are groups of very young stars which are loosely held together by gravity and will over time drift apart over a period of several million years. Globular Clusters on the other hand are formed from very old stars.
Both clusters have NGC numbers which stand for the New General Catalogue (NGC) which was produced in 1888 and was an addition to the General Catalogue and Nebulae and Clusters that had been produced in the first half of the 19th century by William Herschel who had discovered the planet Uranus in 1781 and his sister Caroline and William’s son John Herschel.
NGC 6193 is open cluster which can just be seen with the naked eye, containing 27 stars, its about 3 million years old and is about 3,800 light years away. ,
NGC 6397, is a globular cluster and is located about 7,200 light-years from Earth, making it one of the two nearest globular clusters to Earth The cluster contains around 400,000 stars, and can be seen with the naked eye under good observing conditions.
Both clusters can easily be seen with binoculars. 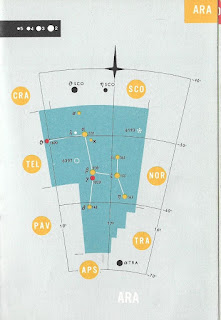