Equuleus the Little Horse
Equuleus constellation lies in the northern sky. Its name means “little horse” or “foal” in Latin.
In Greek mythology Equuleus is associated with the foal Celeris (meaning "swiftness" or "speed"), who was the offspring or brother of the winged horse Pegasus.
It was one of the 48 constellations listed by the 2nd century astronomer Ptolemy, and remains one of the 88 modern constellations. It is the second smallest of the modern constellations (after Crux), spanning only 72 square degrees. It is also very faint, having no bright stars.
Alpha called Kitalpha which means ‘A Piece of the Horse’ has a magnitude of 3.9 Kitalpha lies at a distance of 190 light years it is a G7 class giant star. 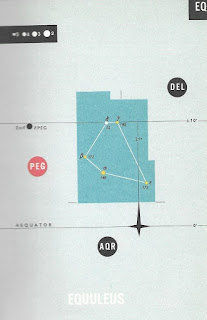