Draco the Dragon Circumpolar Northern Hemisphere
Dragons feature in many ancient legends, the body of Draco lies coiled around the celestial pole, although a large constellation it is quite faint being formed of a long line of curved stars ending in 4 stars that form a quadrilateral shape that represents the head of the dragon.
Alpha or Thuban which means ‘Snake’ was the North Star when the great pyramids were built in Egypt around 4,000 years ago. The position of the North Star changes in time due to the wobbling of the Earth. It takes the Earth around 24,000 years to wobble once meaning that during this period of time the North Pole of the Earth will describe a circle in the sky. In about 8,000 years time the bright star Vega in Lyra will be the North Star. Today we have Polaris in Ursa Minor as the North Star. People in the southern hemisphere are not so fortunate at the moment as there is no bright star to mark south. Thuban is 303 light years away and shines at magnitude 3.6 and is an A0 giant class star. It is hotter than the Sun.
Beta or Alward which means ‘The Old Mother Camels’ and has a magnitude 2.8 brighter than Thuban. It lies at a distance of 380 light years and is a G2 giant star and is slightly cooler than the Sun.
The brightest star in Draco is gamma or Eltanin which means ‘The Great Serpent’ it has a magnitude of 2.2 and is an orange K5 giant star, lying at a distance of 154 light years away. 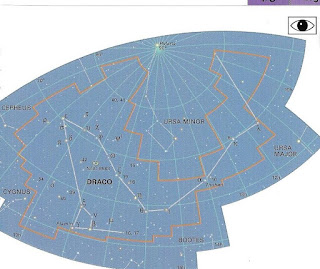