Dorado the Goldfish or Swordfish
The name Dorado is Spanish for mahi-mahi, or the dolphin-fish. The mahi-mahi has an opalescent skin that turns blue and gold as the fish dies. This may very well be the reason Dorado is sometimes called the goldfish.
Dorado is in the southern sky and was unknown to the Greeks it was the constellation of Dorado was one of twelve created by Petrus Plancius from the observations of Dutch navigators Pieter Dirkszoon Keyser and Frederick de Houtman and first appeared on a celestial globe published circa 1597-8.
Dorado was taken a bit more seriously when it was included by Johann Bayer in 1603 in his star atlas, Uranometria, there are no myths associated with this constellation
The only bright star is alpha at magnitude 3.3 it is an A0 class star, 169 light years away,
It is in Dorado that we can see the Large Magellanic Cloud (LMC), which is a satellite galaxy of our Milky Way Galaxy. The LMC is around 163,000 light years away.
The first recorded mention of the Large Magellanic Cloud was by the Persian astronomer `Abd al-Rahman al-Sufi Shirazi, (later known in Europe as "Azophi"), in his Book of Fixed Stars around 964 AD.
The next recorded observation was in 1503–4 by Amerigo Vespucci
Ferdinand Magellan sighted the LMC on his voyage in 1519, and his writings brought the LMC into common Western knowledge. The galaxy now bears his name.
The LMC is the fourth-largest galaxy in the Local Group, after the Andromeda Galaxy (M31), the Milky Way, and the Triangulum Galaxy (M33). There is a Small Magellanic Cloud in the constellation of Tucana the Toucan.
In 1987, the Supernova 1987A (SN 1987A) was observed in the LMC approximately 168,000 light years from Earth.
The supernova was discovered by Ian Shelton and Oscar Duhalde at the Las Campanas Observatory in Chile on February 24, 1987, and within the same 24 hours independently by Albert Jones in New Zealand. The supernova reached a peak magnitude of about 3.0 in May before its brightness declined in the following months.
Four days after the event was recorded, the progenitor star was identified as Sanduleak −69° 202, a blue supergiant 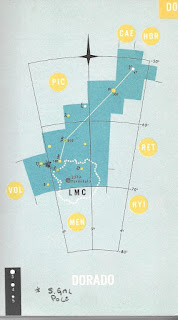