Delphinus the Dolphin
A small constellation that dates back to the time of ancient Greece. The dolphin rescued the musician Arion from drowning after he was robbed and thrown off a ship, as a reward the dolphin was placed in the sky for ever.
In legend dolphins were the messengers of the sea god Neptune.
Delphinus is close to Altair, in summer triangle. Its brightest stars are only just above mag 4 but it is a small compact little group like a very loose star cluster. In shape the dolphin bears a vague resemblance to a tiny dim distorted Plough.
Its 4 main stars form a rectangle called Job’s Coffin the origin of this name is not known.
Alpha with a magnitude of 3.9 is 254 light years away and is a B9 class star.
Beta is a F5 giant class star and at magnitude 3.8 is slightly brighter than alpha it is 101 light years distant.
Gamma with a magnitude of 3.9 is 101 light years away and is a F7 class star.
Delta with a magnitude of 4.3 is the faintest of the main stars lying at a distance of 223 light years and is a K7 class star.
Delphinus lies in the milky way so a very rich area for star sweeps.
George Alcock discovered a nova on 8 July 1967 It continued to brighten, reaching a peak of magnitude 3.5 on 13 December 1967 before fading quickly to magnitude 5.1, and then varying between magnitudes 4.4 and 5.7, and reaching magnitude 4.2 in May 1968 before fading steadily; it was magnitude 9.75 by the end of 1971. In 1968 it was called HR Delphini. 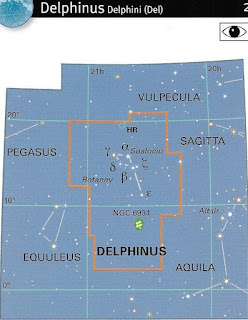