Cygnus the Swan - Northern Hemisphere
The celestial swan is sometimes called the northern cross since its + shape is very striking. Its brightest star Deneb at magnitude 1.3 and is one of the members of the summer triangle. Although the faintest of the triangle it is actually is the brightest only appearing fainter because it is the most distant.
In mythology Cygnus represents a swan flying down the milky way, swans feature in many legends including that of Zeus who visited Leda wife of King Tyndareus of Sparta in the guise of a swan. The result of their union was Pollux one of the heavenly twins.
Alpha or Deneb which means ‘Tail of the Hen’ marks the top star of the northern cross has a magnitude of 1.3 and is a class A2 supergiant star with a surface temperature of around 8,000’C much hotter than our Sun, It lies at a distance of 2,600 light years.
Beta or Albireo or the ‘Hen’ is at the bottom star of the cross of Cygnus it has a brightness of magnitude 3.2, it is an orange K2 giant star and is 430 light years away. If you have a small telescope or a pair of binoculars you will see that Albireo is actually a double star with the companion star being a much hotter B class giant star of magnitude 5.1.
Gamma or Sadr which means ‘Breast’ is the middle star of the cross. It is brighter than beta with a magnitude of 2.2 at a distance of around 1,800 light years. It is a F8 supergiant star slightly cooler than the Sun.
To the left of gamma is epsilon or Gienah which means ‘Wing’. It is 73 light years away and shines at a magnitude 2.5. It is an orange K0 giant star indicating it is cooler than the Sun.
If you look to the right of gamma you will see delta which has no name. It is of magnitude 2.9 and is 165 light years away. It is an A0 class star.
Between gamma and beta is the variable star chi which can vary in brightness from magnitude 3.3 when it is easy to see down to magnitude 14.2 when a large telescope will be need to see it. Chi is a Mira type variable star named after omicron ceti or Mira the prototype star of this class of variable stars. It is a M6 giant class star, much cooler than the Sun.
Messier or M39 is an open cluster that can be seen as a fuzzy light patch of light north of Deneb shining at a magnitude or 4.6. It was first recorded by Aristotle in 325 BCE. M39 lies about 950 light years away and only contains about 30 stars.
NGC 7000 or the North American Nebula was discovered by William Herschel in 1786. This nebula is lying close to Deneb. Some people claim it may be visible to the naked eye under good, dark conditions, and a preferred object for amateur astrophotographers. Its mag is 4.4 but spread over a wide area.
It is called the North American nebula because it has the same shape as North America and is a great favourite with astronomers to photograph. It was first photographed by Max Wolf on December 12, 1890.
The distance to the North America Nebula is estimated at 1,600 light years. 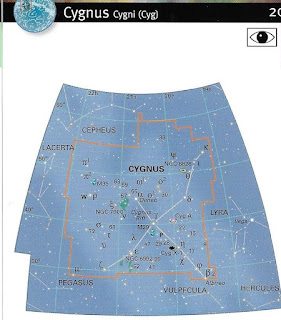