Crux The Southern Cross – Southern Hemisphere
The smallest constellation in the sky, but one of the most celebrated and distinctive. It was formed from some of the stars of the constellation Centaurus by various seamen and astronomers in the 16th century. Crux means cross in Latin.
Johan Bayer incorporated these stars into his Uranometria star atlas in 1603 thus making it an officially recognised constellation.
Crux lies in a dense and brilliant part of the Milky Way which makes the famous Coalsack Nebula seem even more striking in silhouette against the star background.
Alpha or Acrux which is a 19th century name and has no ancient meaning. It has a magnitude of 0.8, it is B0 class star with a surface temperature of 22,500’C compared to the 5,800’C for the Sun. It lies at a distance of 320 light years.
Beta is a star of magnitude 1.2 lying 280 light years away its a B0 giant star also with a temperature of 25,000’ C
Gamma is 87 light years away and has a magnitude of 1.6 its a red M3 giant class star with a temperature of 3,300,C. It is the nearest red giant to the Sun.
Delta at magnitude 2.8 is the faintest of the four stars that make the Southern Cross. It lies 345 light years away, it is a B2 class star with a temperature of 22,000’C
The Kappa Crucis Cluster or NGC 4755 , also known as the Jewel Box (or Herschel’s Jewel Box), is an open star cluster in Crux. It is one of the youngest clusters ever discovered, with an estimated age of only 14 million years. Kappa is one of the brightest members of the cluster.
The 19th century English astronomer Sir John Herschel described the cluster as “a casket of variously coloured precious stones,” which is how the cluster appears in a telescope and how it subsequently got the name the Jewel Box.
The naked eye, the cluster appears like a star near beta, The brightest stars in the Jewel Box Cluster are supergiants. The three brightest stars got the nickname “traffic lights” because of their different colours.
The cluster has a visual magnitude of 4.2 and contains about a 100 stars. It is approximately 6,440 light years distant from the solar system.
The cluster can only be observed from the southern hemisphere. It was discovered by the French astronomer Nicolas Louis de Lacaille on his trip to South Africa in 1751-52.
The Coalsack Nebula is located about 600 light-years away.This huge, dusky object 35 light years across forms a conspicuous silhouette against the bright, starry band of the Milky Way and for this reason the nebula has been known to people in the Southern Hemisphere for as long as our species has existed.
It was first reported in Europe in 1499. The Coalsack like other dark nebulae, it is actually an interstellar cloud of dust so thick that it prevents most of the background starlight from reaching observers. 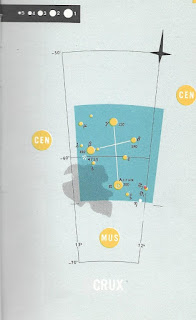